This event has now passed but you can watch a recording of this online panel discussion on-demand. 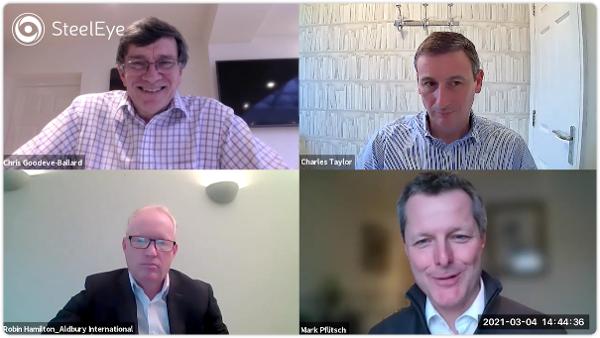 About Speakers Details Watch on Demand

While operational resilience has always been a significant area of focus, the Covid-19 pandemic has increased its importance.

To strengthen operational resilience in the financial services sector, the Bank of England, FCA and PRA are setting out a range of new requirements on firms. But what does this mean in practical terms, how do you get it right, and how can trade and communications surveillance help?

This is what Charles Taylor, Robin Hamilton and Chris Goodeve-Ballard from Aldbury International discussed in this SteelEye webinar moderated by Mark Pflitsch.

The webinar aims to educate market participants on the evolving role of operational resilience and provide practical advice on how firms can get it right.

Why watch the webinar

Drawing upon the expertise of our panel, this webinar will give you a better understanding of the latest regulatory guidance, which will help you take the right steps in strengthening the operational resilience.

In 2005 Robin was seconded to the Foreign & Commonwealth Office with responsibility for all aspects of diplomatic security in the Balkans. Robin then moved into commercial security in 2008 first with Fidelity International and then AonHewitt.

In 2010 Robin joined GE’s global operations team and was responsible for delivering the regional Crisis Management programme across multiple business sectors and responding to situations that ranged from the London Olympics in 2012 to the Paris terror attacks in 2015. Robin is now the CEO of Aldbury International.

Charles has over 30 years experience within financial markets. He joined the City in 1986 as a stock jobber on the London Stock Exchange floor and during his career in the City he has held senior positions both within Global Investment Banks and European Agency Brokers. Most recently as a founding partner at Redburn Europe Ltd where he was fundamental in starting up and building out one of Europe’s largest independent agency brokers.

Charles is highly experienced in UK, European and US financial markets with a deep understanding of market structure and its commercial relevance. Charles has worked alongside UK and European regulators and exchanges to help businesses asses the effect of new regulative and legislative change on internal procedures and offerings. He has built out electronic trading solutions alongside instigating and implementing internal compliance procedures ensuring continuity of business practices at regulative change points. He is a regular conference speaker and a member on a number of industry steering groups.

Chris Goodeve-Ballard has nearly 36 years experience in Financial Services, ranging from Direct Sales through Benefits Consultancy to European Head of Compliance and UK Head of Operational Due Diligence. He served as a main Board Director in the consultants, Gissings and was the CF 10 & 11 (Compliance and Anti-Money Laundering control functions) at Aon Hewitt, with experience of both the DPB and FCA regimes.

Chris has led operational reviews of Fund Managers and service providers throughout Europe, the US, Australia, New Zealand and Hong Kong, covering all aspects of the firm’s operations including regulatory and trading compliance, business continuity, disaster recovery and crisis management, relationships with and oversight of third party service providers and anti-fraud controls. As a leading authority in this field Chris is a regular conference speaker and teaches a hedge fund compliance module for the Henley Business School.

Mark Pflitsch is the Head of Sales at SteelEye and has over 28 years of experience in the financial sector. Mark’s sales career has taken him from a global Information Vendor leader to the RegTech sector today via Investment Banks and Agency Brokers for Electronic Execution, Clearing and Custody Services for both the buy-side and sell-side communities.

Mark’s focus has always been on delivering operational efficiencies to clients through straight-through processing and automation wherever possible – complexity made simple.

Watch the webinar on-demand using the form on this page.